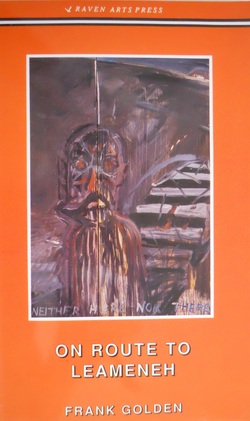 Lorca Sings A Canto On Ludlow
(short excerpt)
I'll hit out for Gleninsheen
Rather than heel it on First
Blow bills and blush kisses
To the revenant on Seventh
Carburet my lung packs
Fill my stomach at Katz's
Watch the kosher be kosher
Fill their suburban princesses
With hot dogs and sauerkraut
And jewel-jellied cheesecake
While their seeded blood-mothers
Get pressurised and hot
Settle their boobs like buttocks
On the counter top
Chomp on flame-fingered burgers
Slake their thirst with seltzer
Try to eat to the point
Where it solaces the hurt.
These women are big
These women are fur-bound
Bulging at the seams
With lurid fat contours
Rippling jowls
And ice-cream temptations
On the tips of their tongues.
"Chocolate chip, buddy,
An' hold the fudge sauce!"
While their fingers clink
Glass beads 'n baubles
Gifts from their honies
Whom you'd think must be sweet
As only honies can be sweet
But they're not, not really,
Not anymore.
They do their business
With liquorice wallets
Slide down to the river
Looking for something more sacred
Than peppered beef
Their eyes on Essex
Lips on barrels of brine
Hands with an action so sweet
They crank an old song from a good girl.
.............................


The Men Of Clare Now Drink Their Porter On The Pallisades

With the yellow flesh of mussels from Poulnaclogga
still rotting in their cavities
they board the Number One on Broadway
for Inwood and the Bronx.
Big boys with tier mother's eyes in their eyes.
Limestone eaters, cave dwellers, with heron feathers
stitched like scapulars into their buttocks,
and Toonarossa holly sprouting from clay packs
between their toes,
and salt water from Dunbalcaun Bay
passing for urine through their bladders.
On windless days their scale Channin, Chrysler, and
Rockerfeller,
overview this canyon terrain with chemicals stacks
on New Jersey wasteland,
and gangland shells blistering the South Bronx.
Visions of ridges and defiles among the pencil Avenues
scoring the city,
recalling silver outcrops past Loch Aleenaun
and stone escarpments on the crest of Black Head.
It leaves their heads thinly present,
memories pecking the cranial shell
on the subway list and rock to Marble Hill,
where they buy six-packs of Guinness,
head down Independence Avenue to the Conrail line,
and from their perch on Devil's Rock,
spit their ferocious yearning
into the water of Spuyten Duyvil.

"It would be naive to expect an easy read; indeed Golden threatens to overwhelm us with the darkness that can lie inside. The discomfort is, however, balanced out by moments of extreme lyricism, and by the author's unflinching honesty." Andy Robinson/The Galway Advertiser/The Interior Act(Salmon Publications 1999) 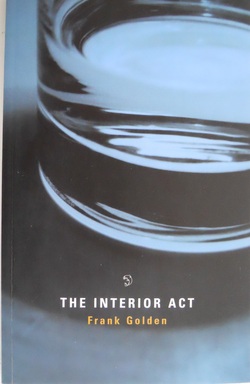 I have walked the Flaggy Shore a thousand times,
ten thousand times, infinitesmally eroding
fossilised crustaceans, clusters of calcified weed,
delicate evidences locked in time.
I lick the salt stone & whisper to its eerie space
words it will carry more or less
as it carries the memory of waves - imperturbably.
I release my words and touch
as stone releases the soft, memoried lives
of molluscs and winkles - millions of generations
fluent in this rock, in its inanimate memory.
Does space hold such companionable eternities,
and will we find there is a time in space
and space in time replete in memory of what was and is?


from The Xavier Poems/The Interior Act


I was born on a blue day
While Father sat with an ash rod
Astride the sea,
Thinking of his sunflower harvest
As the season's first surge of mackerel
Thrashed after white bait.
My memory is like an accretion
Of cobalt grains - a ball
Seized in my head
And bowled along blue tarmac,
Rolled to shore
Washed out in the sea-curled surf,
A leaded weight
Cast back in my father's eye
Blinding him with the truth
About himself and me.
We are brothers
I realise that now,
Blue-eyed gardeners,
Archaeologists of the air,
Accordionists of water.
I trust him and trust
Him as a guide.
Now that he is dead
He remembers my life,
He arrives,
And I await him.
He hovers over me
And remembers
Being born on a blue day,
A mackerel sky,
His Father playing sweetly
To a distant woman
Leaning through a blue window,
Dreaming a life to fill a space.
He kneels - my Father, my Father's Father, I
Kneel and pool a palmfull
Of mirroring water,
Casting my image home to the sea
My music to a spell of time.

"In Daily Accord is a satisfying experiment. It remains very much an anarchic patchwork of perceptions, but one through which certain threads are patterned. Recommended." Billy Ramsell/Southward/In Daily Accord(Salmon Publications 2009) 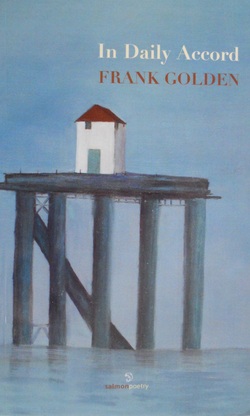 
We drive westward
Into the swollen land
Our dreams behind us


Some lives never rise
The mind illuminates
No anchoring space

We sit to each other's eyes
Bleeding
As the light degrades
In Partial Settlement(Wiffle Press, New York 1987) 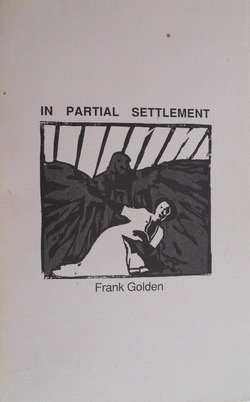 There are signs
It seems inevitable
Everything will come around again.
I can feel my home walls
Throb in their mannered way
The atmosphere swinging my head
For a day or two,
My Father elegiac and remote
Whispering snatches from
The Hound of Heaven,
Looking at his bald head
In the airport lavatory,
Like a mystical protuberance
Rising towards the heavens.
It was the cortozone that did it
The marginal remains falling out
At the altar rail on Christmas Eve,
His pubic hair too so he looks
A little like a boy, beautifully flaccid,
Full of junky recollections,
Reaching towards Mama
In a fusion of silence and desire,
Remembering her in the fifties,
Tight in her wide curly perms,
Her staunch rump, her stately breasts,
Her Catholic Herald's tone
When he made it inside.
I could never imagine him
Humping to make me
Or any of the rest of them.
Their eyes were too oblique
Their tongues too solid,
Never discovering the crimes of their household
And except for zippers and bathing suits
I never saw him touch her in daylight.
Still God shone in their eyes
Like a sweltering Fantasia,
Their whole lives in the eyes of God
Their wisdom tending to the cracked plaster
While I trounced myself silly
In a bout of anorexia, visualising my bones
In a mirror turned to see nothing but excess,
Leaving my ribs and buttocks blue
From the rigors of a reforming zeal.
They always maintained a "Good Parent"
Distance, from me, their most difficult son.
Memorialising my last words at sixteen,
Falling slantwise like Chatterton
Across his hectic bed,
Filling the apple cart with lead piping
Stolen from the great poets,
Who romanticised the dangers of poetry.
Mother felt that poetry was cruel, remorseless,
It was the life she meant, visualising the gutter,
Seeing me Beyond the Beyonds,
Uprooted, ridiculed and alone, a man
Clambouring up Sunflowers in Bolivia,
Or worse still infecting generations
With lunacies they'd be better off without,
Better in fact if you'd never been born. 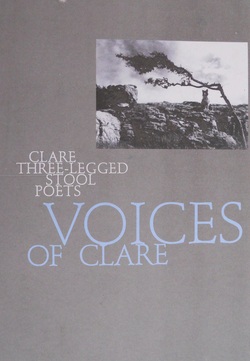 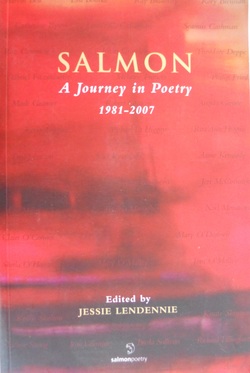 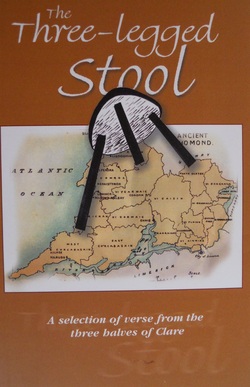 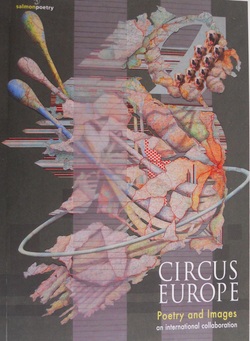 
Some glorious madness was demanded
Some necessary miasma of belief,
A patch of ground, a bond, or ponzi scheme,
A tulip - Semper Agustus or Admiral Lieffkens perhaps,
Shares in AIB, a 500k council house in Cabinteely,
A pied-a-terre in Aigue Morte or Vaison de la Romaine.

The problem with humanity
Is we seek out destruction
As much as we seek out salvation -
Abrogating a golden age
Revelling in hugger mugger crisis calls
Prizing mercury from cordate teeth
Pulsing solutions from one sump to the next
Landing on humpbacked gods
Dreaming of casual ascension.

For the polder girls and boys
No religion ever came above money,
You need cohesion for good commerce
Isn't that the truth?

Will we intelligence our way to a collective everything?
Will we all dress in orange,
Be responsible for our own little dyke?
Knowing that if one dyke goes they'll all flat pack like dominoes.
Slaper and waker, waker and slaper.